And there was smoke...

So it began with the gear box and transmission system making a peculiar sound, like a squeak but this went away after 3-4mins so we ploughed on. Two of us were asleep when it happened; we were climbing steadily up the Swiss Alps and going nicely in and out of tunnels at the steady speed of around 94 kmph (58-60mph). The gradient had started to increase but nothing too major, in fact it was more of a casual hill. Then I realised that we had lost all of the power in the car and that our speed was slowly decreasing, however the hearse was heavily loaded so we thought nothing really of it. It was only when I looked behind us to see if we were causing a queue that I saw the smoke bellowing out of poor old Hearsey!!

We plugged on until we found a safe place to pull in to and started to laugh. Looking behind us we could see a long old trail of oil/transmission fluid...not good! We set out our little red triangle, rang AA European cover and began to set up a massive game of Hearts (I would like to mention that I managed to 'Shoot the Moon' and get all of the Hearts and the Queen of Spades!!) All the people driving the other way would slow down to see what the problem was and then realised that we were in a hearse so cracked up with laughter as we are now very used to.

The garage man came to the rescue, but there was one BIG problem...he spoke no english!! He towed us back down the hill and had a look under the car and said pretty much the only thing he knew in english, "No, not good.."

I am now writing this from a campsite just a minute away from the garage which Hearsey managed to limp to. The three of us have decided that the show must go on and this of course cannot happen without our loyal old girl. So we are going to be towed to a Ford garage tomorrow to try and get her repaired...the entire transmission system!! We will be trying everything possible to get her un on the road again and tackling the Alps.

On brighter news, when all was well, we got our first drive by honk of approval for Hearsey!

We will of course keep you posted when we next get Wifi, never fear. Say a little prayer for Hearsey guys!! 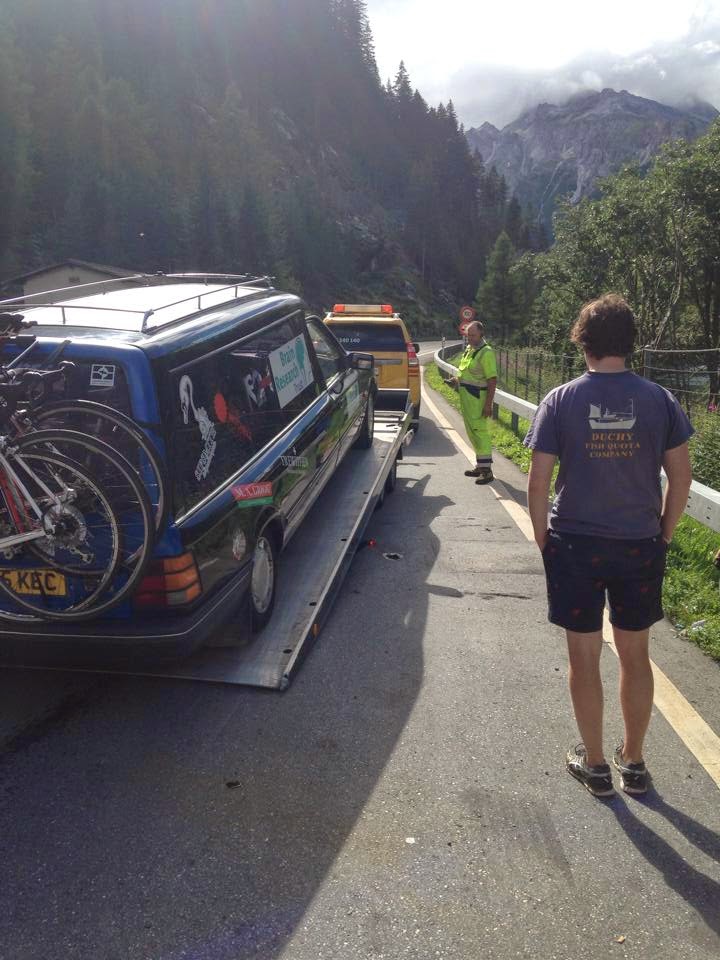